The Gottman Method for Couples Therapy

John Gottman is a well-known psychologist whose work has influenced the direction of couples therapy worldwide. Gottman has spent his four-decade career researching why marriages fail and based on knowing the characteristics that cause couples to self-destruct, has created a therapy approach to address these issues.

To carry out his research, Gottman has invited couples to spend time at his research lab at the University of Washington in Seattle in what he affectionately calls The Love Lab. He and his research team videotape their interactions and follow them over the course of their relationships. Based on studying over 3000 couples, Gottman and his team are able to predict with an average of over 90% accuracy whether a couple will divorce. One of the main characteristics they found to predict divorce is what they call The Four Horseman of the Apocalypse, named after the four horsemen described in the New Testament to predict the end of the earth as we know it. Gottman’s team uses this metaphor to illustrate negative communication styles that, if allowed to run rampant in a relationship, can be lethal. The four horsemen include criticism, contempt, defensiveness, and stonewalling. Another significant predictor of later divorce in Gottman’s research is a harsh startup. When a conversation about an issue starts in harsh way, that is, with criticism or contempt, 96% of the time it will not end on a positive note and will not move the couple towards resolving the issue. Other predictors of divorce include one partner feeling flooded by the hostility, as evidenced by body language that shows that partner is highly distressed physiologically. Another predictor is what Gottman calls failed repair attempts, meaning one partner extends an olive branch to bring down the tension, but the other partner rejects the offering. And finally, the last predictor Gottman’s research found was bad memories, meaning the negativity and hostility has caused the couple to overwrite the positive memories from the early years of their relationship. 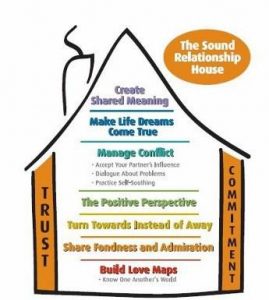 The first three principles form the foundation of the relationship house. Building Love Maps: It is essential that couples know each other well, their history, pains, worries, stresses, joys, hopes & dreams. Sharing Fondness and Admiration: The antidote to contempt, this principle focuses on the amount of affection and respect within a relationship. Turning Towards: Strong couples are aware of each other’s bids for connection and turn towards them. It’s in the small moments of everyday life that the bond of a sound relationship is formed.

Couples with a strong foundation operate from a Positive Perspective which makes it easier for them to problem-solve and manage conflict.

The last two levels of the Gottman relationship house are linked: Make Life Dreams Come True and Create Shared Meaning. These principles help couples create an atmosphere that encourages them to talk openly about their hopes, dreams, and aspirations and create a shared story for their lives together, their vision, their legacy, their mission.

The Sound Relationship House is strongly anchored by trust and commitment. Trust is present in a relationship when a partner is confident that their spouse tries to always think and act with his or her best interest in mind, i.e. “s/he’s got my back.” And commitment means believing and acting on the belief that your relationship with your partner is forever, for better or for worse, ‘til death do us part.

The Gottman model of relationship therapy is very effective at helping couples heal broken or wounded relationships and move forward in a positive direction. If you are interested in pursuing couples therapy using this approach, please give our office a call.